Slim chance by Linley Boniface
This story in the NZ Listener (May 17-23 2008) on male sufferers of eating disorders begins by noting the negative media reaction to the revelation that British politician John Prescott was bulimic.

Dr Fishman was asked to contribute. 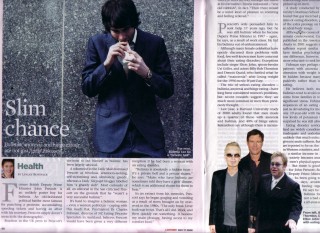 Psychiatrist Dr Charles Fishman, director of NZ Eating Disorder Specialists in Auckland, believes Prescott would have been given a very different reception if he had been a woman with an eating disorder.

“Bulimia is absolutely a hidden issue – it’s a private hell and a private shame”, he says. “Males who have bulimia are sometimes told they have a girls’ disease, which is an additional shame for them to bear.”

Recent research suggests that men could make up as many as 25% of those with anorexia and bulimia, and 40% of binge eaters.

Fishman says perhaps one in 10 of his patients with anorexia are men. Their obsession with weight is more likely to be hidden because many exercise compulsively rather than controlling their eating.

He believes both male and female bulimics tend to avoid conflict, and often come from families, in which food has a significant status. Fishman says the consequences of an eating disorder can be just as devastating for men as for women; one 19-year-old with bulimia had such low levels of potassium that his GP was surprised he was still alive.

Eating disorder services in New Zealand are widely considered to be-woefully inadequate and underfunded, making it unlikely that much extra attention will be given to male sufferers. But eating disorders are reported to be on the rise among men in Western countries, and Fishman expects a similar increase in New Zealand as society becomes more obsessed with men’s physical appearance.

Read the full text of ‘Slim Chance’ in the Listener online.